Posted by Saraswathy Balakrishnan on April 12, 2010
An omelet is a dish made from beaten eggs quickly cooked with butter or oil in a frying pan, sometimes folded around a filling such as cheese, vegetables or even meat. These omelet always favorite among the kids.Blending eggs with onion,tomatoes and Indian spice was kind of usual thing in my kitchen but I had some spinach laying in my freeze for quite sometime. Why not prepare spinach omelet with some mushrooms just like served in IHop but omitting the chesse with Indian masala. It was a perfect combination with curd rice and it just vanished once served. 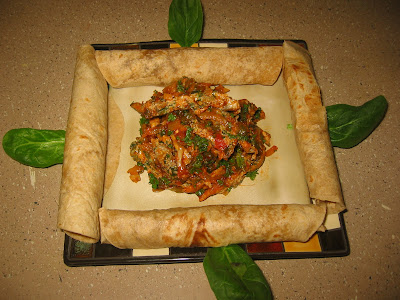 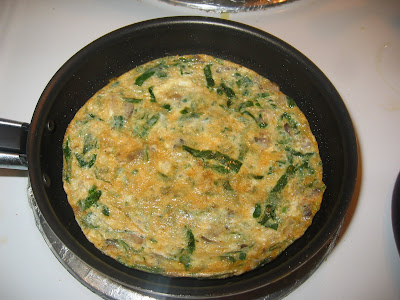 Preparation Method:
Melt 2 tsp. butter in a small skillet over high heat. Add mushrooms and cook, stirring frequently, until golden. Lower the heat, add spinach and saute briefly, until it wilts. Set aside and drain as much liquid as possible from the vegetables.Combine eggs, water and pepper in a mixing bowl.Beat with a fork until combined, but not frothy.Then add the sauteed spinach and mushroom mixture to the egg mixture-blend well. Melt the remaining butter in the skillet and pour the mixture.Allow one side of the omelet to cook and then fill over to allow the other side be browned .Transfer to a plat and allow it to cool and then cut them into 1inch strips and set aside. 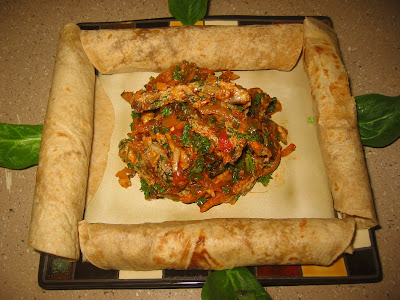 Add 2tbsp oil and roast all the grind all ingredients to a smooth paste and set aside.

Heat oil in a vessel splutter the curry leaves,mustard seeds,cumin seeds and onions- fry them till onions turn in to golden brown.Then add the spice powders and saute till the raw smell are removed.Pour in the grind paste and bring to boil. As it starts to boil add the egg strips. Once they thicken-adjust the level of salt and-transfer to serving platter garnished with chopped coriander and spring onions. 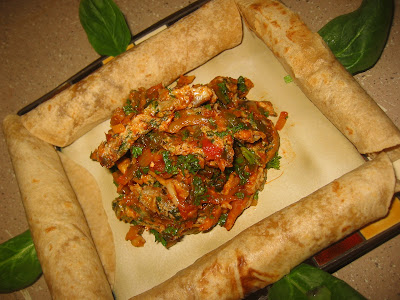 Pavithra Srihari said…
I thought it was just omlette but omlette with masala mix is something different to me and it looks reeeaallyyyy yummmmyyyyyy. This is now staright going into my to do list. Thanks for sharing it dear
Monday, April 12, 2010 10:46:00 AM

Saraswathy Balakrishnan said…
Thanks a ton girls for the lovely encouraging comments:)Pavi dear I got the ideas for presentation from u only:)
Monday, April 12, 2010 5:38:00 PM

Siddhi Shirsat said…
hi saraswati, how r u?...i was off from blogging from past few weeks due to heavy load of work so missed ur mny yummy recipes which u had posted..vl c thm now...hey loved this masala omellete...so healthy n tempting one...loved the spices wch u used in it...hey mushrooms n spinach vl give a nice taste to it...very well presented and delicious dish
Tuesday, April 13, 2010 4:25:00 PM

Siddhi Shirsat said…
hi saraswati, how r u?...i was off from blogging from past few weeks due to heavy load of work so missed ur mny yummy recipes which u had posted..vl c thm now...hey loved this masala omellete...so healthy n tempting one...loved the spices wch u used in it...hey mushrooms n spinach vl give a nice taste to it...very well presented and delicious dish
Tuesday, April 13, 2010 4:28:00 PM

Hamsi said…
All recipes of urs seem to be an art work. Really appreciable and these omletes are so tempting. Ymmmy!
Wednesday, April 14, 2010 8:07:00 PM 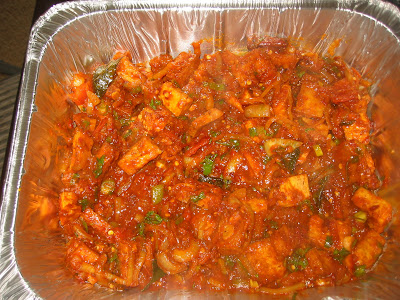 Spicy Tofu Sambal in South Indian Style
Many have known that we recently celebrated my son's 6th b'day few days ago and I had quite a number of vegetarian guests for the party. Well I'm not very creative in preparing veg dish like others but I wanted them to taste a very popular taste bud of my hometown prepared in the essence of South Indian flavor.Since we had chicken briyani and Kashmir Pulao I wanted make a dish that can blend well with both. Finally I decide to prepare a Malaysian delicacy know as sambal-very spicy chilli paste which can be added to any type of dishes. The taste was really good and all my guests really loved it and I would like to share the recipe with all.....

Saute all the ingredients in the ch… 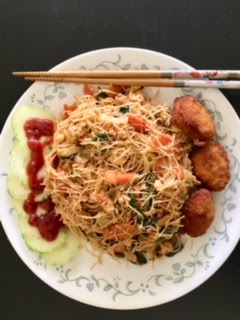 "COOKING FROM HEART" is born from unleashed creativity triggered by boredom and ideas turning the once dreaded chore into timeless pleasures past-times.

As many would have know that I'm basically from the South East region and I tend to love Asian Cuisine using sambal paste most of the time preparing noodles. Sambal paste are commonly used as foundation for so many Asian Cuisine and a condiments to e served at the table. Back at my home theres used to be batches of Sample paste bottled up for Future usage. Here I prepare fresh ones whenever I crave for my hometown badly missed food like -" NASI LEMAK, BEE HOON< FISH BALL NOODLES , CURRY NOODLES !!! " Well I tend to go head over heels for noodles.
What's Sambal- a common question asked by many a whenever I mention them. Sambal are basically dried chilies either pounded, pureed or finely chopped with shallots garlic and incorporate with wide range of ingredients like shrimp paste, palm s… 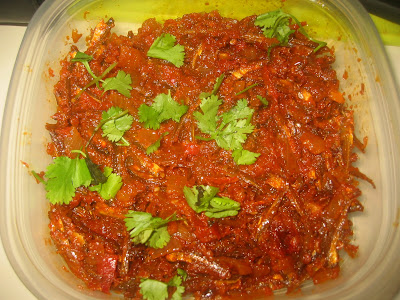