By Saraswathy Balakrishnan September 02, 2009
We were visiting our old friends back in Owasso recently and that's where I learned how to prepare this famous Kerala cuisine from my hubby's friend Ram. It's one of my favorite food which I like to have with brown sugar and banana. Ram taught me how to prepare them step by step and my attempt was a success but first round of the puttu was not in good shape. After making a few I mange to get the shape right. 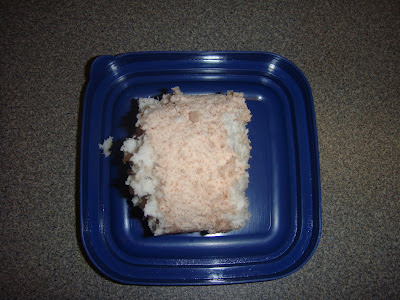 Puttu Source: Wikipedia
Puttu (Malayalam: പുട്ട്,pronounced [puttu]), is a culinary specialty in Kerala. It is also popular in certain areas of Sri Lanka and Tamil Nadu. It is made by steaming moistened rice powder.It is key that only enough water to wet the flour be added, and that too slowly. This should not have the consistency of dough, but rather a damp coarse mixture. Of late, other variations with wheat flour, flour made from tapioca, corn and ragi and even maida are also used. Puttu is also served with various dishes, most popularly papadam, yellow Kerala plantain, chicken curry, kadala curry (black chickpeas curry) etc.For steaming the puttu, there is a special utensil called Puttu Kutti(known as Pittu Bambuwa in Sri Lanka). It consists of two sections. The lower bulkier portion is where the water for steaming is stored. The upper detachable smaller portion, which is separate from the lower portion, has perforated lids so as to allow the steam to pass through and bake the rice powder which has been filled. The upper section is covered with a perforated cup shaped lid once it is filled with rice powder. Another variant is the chiratta puttu, where the steaming is done on a coconut shell die, or in a steel replica of similar shape as photographed.Chirratu Puttu implement alone from top view with cover taken off .Some also have steamed the mixture in a pan similar to an idli pan. The only difference between the typical idli pan used for steaming idlis and the one used for steaming pittu is that there should be small holes on the bottom of the idli pan to allow steam to escape the bottom of each portion. They use pressure cooker as well for steaming. 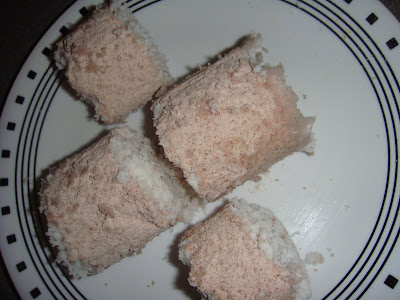 Preparation Method 1: If you are using store-brought puttu or rice flour:
Add salt and approximately 3 table spoons of grated coconut into the flour and mix well. Add water little by little to the rice flour and mix it. The flour should be wet enough for steaming, but we have to be careful when you add water to the flour. The consistency has got to be right. Puttu has to be made in a Puttu maker. Layer the Puttu maker with some grated coconut first, then the rice mixture and then the grated coconut again. Steam for 2-3 minutes, take out and serve hot. 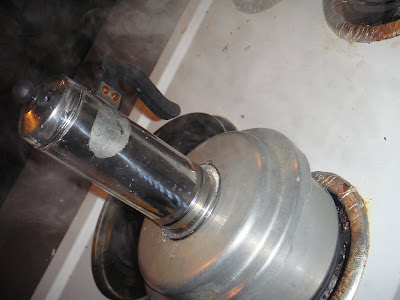 Preparation Method 2:
If you are using raw rice:
First get a good quality of rice and then soak the rice for about 3 hours-drain and then spread them evenly on a white cloth under the sun for better drying as the rice should be completely dried. Then grind them into a very fine powder in the blender. (you can also use the rice flour from the stores or even those pre-packed puttu flour).Empty the powder into a large bowl. Mix salt with water nad sprinkle them little by little to the flour and mix it making sure that there's no lumps formed.Just wet enough powdered form. The mixing should be appropriate such that all the rice grains should be damp enough for steaming.The flour should not turn into a dough form,but has to be in a powdered form itself. 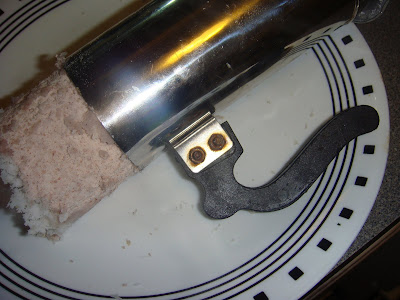 Add half of the grated coconut and the jaggery into it and mix well. (I like to add jaggery if you don't prefer just omit them). Now to fill the mould, first add 1 tsp of grated coconut into it .Now fill the mould with dampen rice flour and close the lid.Heat the pressure cooker after filling 2/3 rd of it with water .The mould can be fixed to the cooker,just after the steam is released .Now allow it to to cook in steam for 5-7 minutes.You can see steam coming out from the small holes on the lid of the Puttu maker.Detach the mould from the cooker and turn it over onto a serving dish.

Saraswathy Balakrishnan said…
Well it's also a very health dish too and thanks for the comment dear
Wednesday, September 02, 2009 11:26:00 AM

Popular posts from this blog

By Saraswathy Balakrishnan March 24, 2010
Spicy Tofu Sambal in South Indian Style Many have known that we recently celebrated my son's 6th b'day few days ago and I had quite a number of vegetarian guests for the party. Well I'm not very creative in preparing veg dish like others but I wanted them to taste a very popular taste bud of my hometown prepared in the essence of South Indian flavor.Since we had chicken briyani and Kashmir Pulao I wanted make a dish that can blend well with both. Finally I decide to prepare a Malaysian delicacy know as sambal-very spicy chilli paste which can be added to any type of dishes. The taste was really good and all my guests really loved it and I would like to share the recipe with all..... Ingredients For The Paste: Serving Size: about 10 20 dried red chillies-soaked in hot water for 30 minutes 1/2 cup chopped shallots 2tbsp ginger garlic paste 1/2 cup chopped tomatoes 2tbsp tomato paste 1tsp sugar 1tbsp lime juice salt to taste 2tbsp chili oil Saute all the ingr
20 comments
Read more

By Saraswathy Balakrishnan August 07, 2012
Cauliflower and Broccoli Stir Fry South-Indian Style We are always trying to eat more vegetables, more greens! A quick stir-fry is one of the fastest, easiest, tastiest ways to make a last-minute vegetable side dish to suit any meal. Vegetable stir fry is healthy as you retain all the goodness of the vegetables by cooking them for a short time.For this stir fry recipe, you can use a mixture of your favorite vegetables such as onions, beans, carrots, peas, capsicum, cabbage, cauliflower, broccoli, zucchini, bel peppers of different colors, egg plant etc.Cut all the vegetables in bite size pieces. Cut them of the same size too. Here I'm just using cauliflower and broccoli only as it's my daughter's all time fav and a perfect way for me to make her clean up a plate without as any" Mom not again or I hate it". Just keep this in mind when preparing any kinda of veg- The secret to good stir frying is not to put too much in the wok at the one time, if you do, t
17 comments
Read more

By Saraswathy Balakrishnan May 28, 2018
Spicy Sambal Mee Hoon "COOKING FROM HEART" is born from unleashed creativity triggered by boredom and ideas turning the once dreaded chore into timeless pleasures past-times. As many would have know that I'm basically from the South East region and I tend to love Asian Cuisine using sambal paste most of the time preparing noodles. Sambal paste are commonly used as foundation for so many Asian Cuisine and a condiments to e served at the table. Back at my home theres used to be batches of Sample paste bottled up for Future usage. Here I prepare fresh ones whenever I crave for my hometown badly missed food like - " NASI LEMAK, BEE HOON< FISH BALL NOODLES , CURRY NOODLES !!! " Well I tend to go head over heels for noodles. What's Sambal- a common question asked by many a whenever I mention them. Sambal are basically dried chilies either pounded, pureed or finely chopped with shallots garlic and incorporate with wide range of ingredients lik
Post a Comment
Read more